The Thinkings of Things

Connecting the eternal to the everyday

One of the most helpful insights I’ve ever been given in how to think holistically and biblically about gender came to me in the middle of a chemistry lecture about orbits, orbitals and the Heisenberg uncertainty principle.

If you think back to high school chemistry class, you may remember learning that all matter is made of atoms, and all atoms are made of a specific number of protons and neutrons, around which a (usually) matching number of electrons rotate. You may have drawn pictures of atoms that looked like this one of carbon: 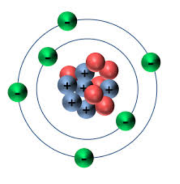 six electrons spinning around a matched set of protons and neutrons, in solidly defined circular patterns. The picture looks the ones we draw of the paths planets follow as they orbit the sun.

Except, as far as representing the actual shape of a carbon atom, it’s almost entirely wrong.

The Heisenberg uncertainty principle states that it’s impossible to measure accurately both the location of an electron and its speed, at any particular moment in time. Thus, you can only depict the likelihood of a particle’s location at a particular moment, then aggregate all those likelihoods into the patterns they form. Consequently, a more accurate (but not perfect) picture of a carbon atom looks like this:

At any moment of time, each of the six electrons in carbon will be located somewhere inside one of the colored, spherical zones around the nucleus. They’ll occupy some locations more often than others (as designated by the darker perimeters of each zone). They’ll frequently be where other electrons have been previously. But in many moments, one or more electrons will be in locations we wouldn’t ordinarily expect. These moments aren’t anomalies. They’re simply a percentage of moments when a carbon atom’s electrons are arranged in a way that’s statistically less common. The sum total of all those electron arrangements, both common and less common, are what make an atom what it is.

It’s a bit of a complicated analogy, but hopefully it serves the point. All too often Christians have defaulted to talking about gender attributes in terms of orbits, instead of orbitals. We think about the various attributes of gender in terms of solid lines that rarely overlap – work and home, leading and submitting, strength and softness.  Problems occur when we look around and see numerous ways those lines  overlap, so that the ever-increasing number of exceptions begins to challenge the legitimacy of the rule. More often than not, the attributes of maleness and femaleness operate like orbitals.

Consider the quality of strength. In Alastair Robert’s recent piece at TGC, he noted data that indicates that, in general, men possess significantly greater physical strength than women, particularly in their upper bodies. Put a woman and man up against each other in an arm wrestling match or a weightlifting competition, and the man will win every time.

Those kinds of statistics are precisely what make the Old Testament story of Jael and Sisera so fascinating. In a nutshell, the story involves a Canaanite general fleeing to safety from battle to the tent of a friend named Heber. Heber’s wife, Jael, comes out to meet him and encourages him inside her tent. She plies him with warm milk and covers him with a blanket and stands watch as he falls into exhausted sleep. Then she picks up a tent peg and a mallet, quietly walks over to him, and literally nails his head to the floor. As I’ve written previously, there is zero ambiguity about the morality of Jael’s actions. Sisera is known for his brutality, especially towards women, and the prophetess Deborah sings blessings over Jael for what she does.

Jael is often appealed to as a one of many biblical exceptions that seem contradict the definition of womanhood so many hold up as the biblical norm. Jael’s actions, while quiet, are anything but gentle. For women who wrestle with the Apostle Peter’s declaration of women as the weaker vessel in 1 Peter 3, it’s easy to turn Jael into an Old Testament version of a movie action hero like Rey or Wonder Woman. You can practically see the movie poster – a woman whose cloak and tunic exposes arms with triceps of steel, one hand casually holding a wooden mallet as big as her head, the other gripping a tent peg, blood dripping down it and pooling onto the dirt at her feet. For all I know, right now an entrepreneurial woman who read Alastair’s article is writing a business plan to launch a workout program for Christian women called Jael’s Gym.

The truth is the Scriptures give us little context for Jael’s actions, and what portion of them were natural, and what were supernatural. Jael’s intentional invitation to Sisera does seem to indicate that her actions were intentional, rather than opportunistic, and thus maybe a measure of premeditation. Perhaps she was the kind of tent-dwelling woman who drove the tent pegs herself, so that she really did have arms of steel and was simply executing a move she’d done a thousand times before. But given the physical norms of male and female strength, it’s just as likely, or perhaps more so, that she simply imitated what she’d observed the men in her tribe do (albeit with a different application!). And her effort, whether sufficient on its own, or supernaturally assisted, was sufficient for the task. In the end, Jael was a woman to whom God gave particular abilities in a particular context for particular task, a task she did faithfully, and one for which she was commended. She was there to do what God had set her in place to do, and she did it.

There is a sense in which the Jaels, (and Deborahs, and Esthers, and women witnesses to the resurrection), could be considered statistically unusual or exceptional. And yet, the whole story of God is one where God regularly uses the unexpected – the weak, the low – to confound those who might otherwise expect to take center stage, so that no human being, male or female, might boast in the presence of God. The frequency with which God gives women (or men) uncommon gifts is not nearly as important as whether we recognize them, and God’s purposes in them, when He does it. As we look to the special revelation of Scripture and the natural revelation of creation to inform our understanding of gender, let’s not let our tendency to focus on the common, cause us to miss God’s purposes in the uncommon, just because they come to us from a place, or in a person, we don’t immediately expect.

2 thoughts on “Orbitals and Uncommon Gifts”